Quality Software proudly made in Germany! 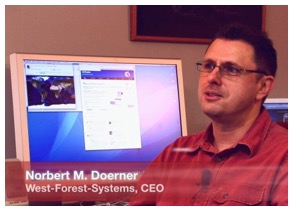 Norbert M. Doerner, the CDFinder project founder and lead developer of what is now called NeoFinder, is a Diplom-Informatiker (masters degree in computer science). He wrote his first software on an Apple //e in 1983, while he still was in High School. After finishing his university degree, he has created a complex newspaper management tool, using only AppleScript, FileMaker, and Quark XPress. He also rewrote an entire commercial software distribution system to work in Mac OS X, using Cocoa.

His most ambitious software project is the digital asset manager NeoFinder, which he started creating as CDFinder in 1995.

Aside from writing software, he also writes articles for computer tech magazines, such as Germanys largest computer magazine, the c't, or the MacTech magazine.


Andreas Becherer, also Diplom-Informatiker (masters degree in computer science), comes from the Windows side of things. He has experience with writing financial software for governments, and extensive database development, design and deployment background.

Since 1998, he is the lead developer of CDWinder for Windows, now called abeMeda

Some legal stuff required in Germany


"I needed something that actually worked, and NeoFinder knocks it out of the park for under fifty bucks."


"I'm running it as our main studio filing system for hundreds of CDs in our archives and I just wanted to say that I am really pleased with it."


"Your program is incredibly fast and easy to use. I've never been so organized. Can't thank you enough!!!"


“I’ve used CDFinder and now NeoFinder happily for years. I find myself using NeoFinder often times for attached disks because it is a quicker tool than Finder. Couldn’t do without it to manage many disks and files! Thanks for creating and maintaining such a useful application!"


"I originally found your software hunting for something to catalog our CDs we used for archiving. That was at the last print shop I worked at. Now I am running a prep department at another shop. Your software was one of my 1st purchases. I came into a shop that has had explosive growth and the system used here was antiquated to say the least. Again CD Finder is tops, I use it all the time."